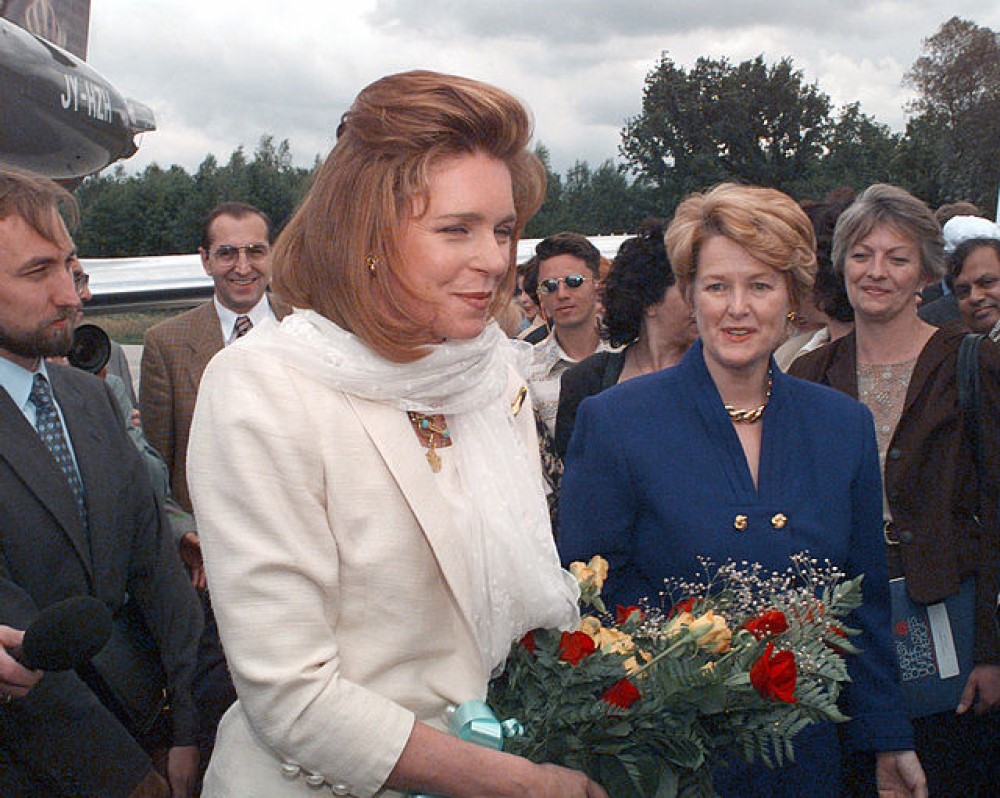 Lisa Najeeb Halaby, otherwise known as Her Majesty Queen Noor Al-Hussein of Jordan, is an international public servant who speaks out on issues of world peace, justice, and the environment. She is the fourth wife and widow of King Hussein of Jordan.

Noor Al-Hussein, which means “Light of Hussein” was born in Washington, D.C. to an affluent Arab American family. She is of Syrian-Lebanese American descent on her father’s side and Swedish American on her mother’s.

After graduating from a private boarding school in Concord, Massachusetts, she attended Princeton University as part of the first coeducational freshman class. She earned her Bachelor of Arts in Architecture and Urban Planning in 1974.

Because of her Syrian roots, Noor was deeply interested in the Middle East and, in 1975, accepted a job offer from a British architectural and planning firm based in Tehran, Iran to design the model of a capital city. When political instability forced a relocation, she took a job with Arab Air Services.

In 1977, Noor became Director of Facilities Design and Architecture for Alia, the Royal Jordanian Airline; it was during this time that she befriended the King. They married a year later and she took Jordanian citizenship, converted to the Islamic faith, and adopted her Arabic name. Because of her Syrian grandfather, the Arabic population embraced her as one of their own and viewed her immersion into the culture as a homecoming.

In 1979, Queen Noor founded the King Hussein Foundation, which houses eight specialized development institutions, many of them focused on children: the Jubilee Institute, the Information and Research Center, the National Music Conservatory, the National Center for Culture and Arts, the Institute for Family Health, the Community Development Institute, Tamweelcom - Jordan Microfinance Company, and Ethmar for Islamic Microfinance. Her international work focuses on environmental issues related to banning landmines, water and ocean health, and climate change.

Noor spends her time in Jordan, the U.S., and the U.K., and remains active in numerous international organizations. She has authored two books, Hussein of Jordan, 1935-1999: A Photographic History, and her autobiography, Leap of Faith: Memoirs of an Unexpected Life.