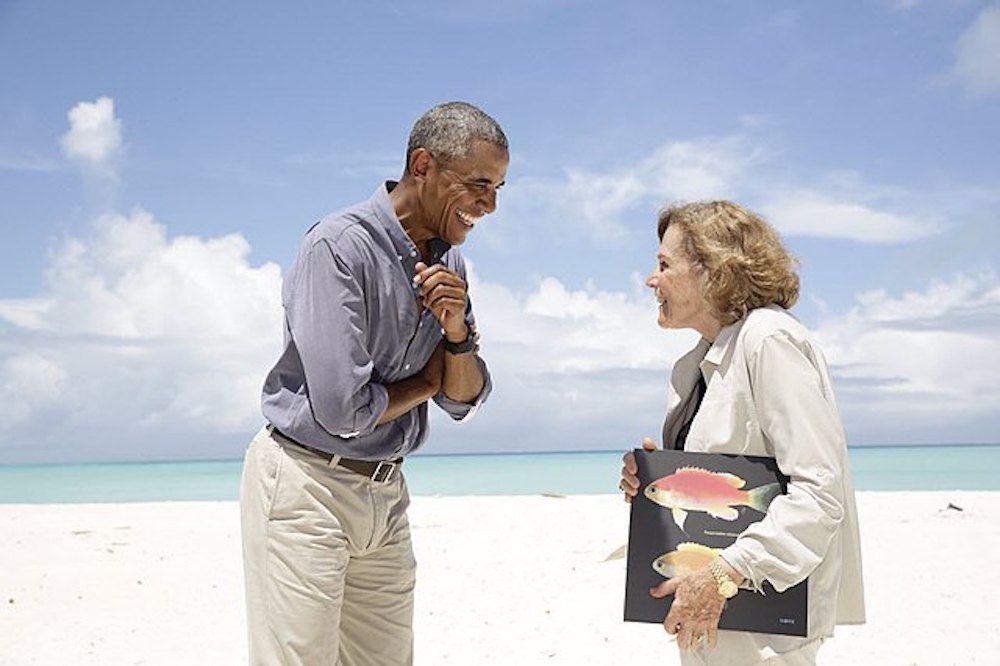 Sylvia Earle, known as “Her Deepness,” is a marine biologist who has logged more than 7,000 hours underwater and led more than 100 expeditions. She was the first female Chief Scientist of the U.S. National Oceanic and Atmospheric Administration (NOAA).

An oceanographer, explorer, author, and lecturer, Earle has dedicated her life to protecting the ocean and its wildlife from the threats of pollution, habitat destruction, invasive species, and the startling decline in ocean fish stocks. She is a leader in establishing marine protected areas around the world, called “hope spots,” and has dived all five oceans.

“We are all sea creatures. We all depend on the ocean,” she said to National Geographic, where she has been an Explorer-In-Residence since 1998. “If you like to breathe, you better like the ocean!”

Earle was born in 1935 to outdoorsy parents who supported her enthusiasm for nature. When she was young, her family moved to a waterfront property, where Earle’s love for the ocean grew out of explorations of salt marshes and sea grass beds. Her education includes an associate’s degree from St. Petersburg Jr. College, a bachelor of science from Florida State University, and a master of science and doctorate of psychology from Duke University.

Research and groundbreaking ocean exploration resulted in a list of achievements for Earle. While she was not accepted into the initial Tektite project, a lab that would allow scientists to live and work under the sea, she was chosen to lead the all-female crew of Tektite II. She dived untethered to the ocean floor, setting a record of 1,250 feet, which still holds to this day. She founded Deep Ocean Engineering and Deep Ocean Technology and co-designed the submersible Deep Rover. She led the Sustainable Seas Expeditions, a five-year program sponsored by the National Geographic Society, and she also founded Mission Blue (also known as the Sylvia Earle Alliance, Deep Search Foundation, and Deep Search), to name a few.

Earle has authored more than 100 scientific papers and several books, including Sea Change: A Message of the Oceans, The World is Blue: How Our Fate and the Ocean’s are One, and Blue Hope: Exploring and Caring for Earth’s Magnificent Ocean.